What is a Pacemaker?

A pacemaker is an electrically-charged medical device. Your surgeon implants it under your skin to help manage irregular heartbeats called arrhythmias. 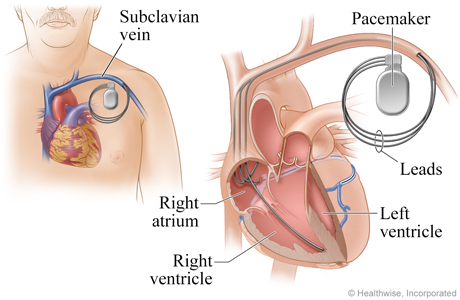 Some people need a special type of pacemaker called a biventricular pacemaker, or bivent. You may need a bivent if you have severe heart failure. A bivent makes the two sides of the heart beat in sync. This is known as cardiac resynchronization therapy (CRT).

Why do I need a pacemaker?

You need a pacemaker if your heart is pumping too quickly or slowly. In either case, your body doesn’t get enough blood. This can cause:


A pacemaker regulates your body’s electrical system, which controls your heart rhythm. With each heartbeat, an electrical impulse travels from the top of your heart to the bottom, signaling your heart’s muscles to contract. A pacemaker can also track and record your heartbeat. A record can help your doctor better understand your arrhythmia.

Your doctor or cardiologist will test you to see if you’re a good candidate for a pacemaker.